What are the different types of Poker Games?

Poker is an incredibly popular card game. This is one game that has its own tournaments, with world champions taking home millions. This skill-based game is played against a group sitting, customarily, at a card table. Each round consists of players being distributed cards, and the players then decide if they want to continue or reveal their cards. The person with the best hand, i.e. an arbitrary combination of cards, wins. However, that is just the classic version of Poker. As poker is becoming more and more famous, a large number of variants have cropped up, each with its own rules and winning combinations. Let’s take a look at these, and understand What are the different types of Poker Games?

This game is supposed to be so popular, it is said that this is the only kind of poker many know how to play. This gameplay and rules of Texas Hold’em are comparatively straight, however, experts warn that the game’s simplicity does not always mean it is easy. The game can have many more possibilities and outcomes, thus making it much harder than other variations of Poker to predict. This in turn also means that at higher-level competitions, the game can quickly become very tough and complicated.

For Texas Hold’em, a standard 52 card deck is used. The dealer is only there to shuffle and hand out cards, and they do not play. The game is thus played against other players at the table. The objective of the game is to build the strongest hand. However, it is also possible to win by getting players with better hands to fold before the cards are revealed. This is done by ‘bluffing’, i.e. convincing players that you have the highest hand so that they fold or leave the round.

In the first round, players are given out two cards each. They can then call, raise, or fold. Over the next few rounds, 5 cards are placed face-up in the middle of the poker table. Known as community cards, these are used to add to the player’s hand to create a strong combination. In Texas Hold’em specifically, you can use some, or even all of the community cards to build their hand. This can include dismissing the cards handed out to you at the beginning of the round. If two or more players choose to use only the community cards and thus end up having the exact round, and it ends up being the strongest hand, the winnings are divided equally. 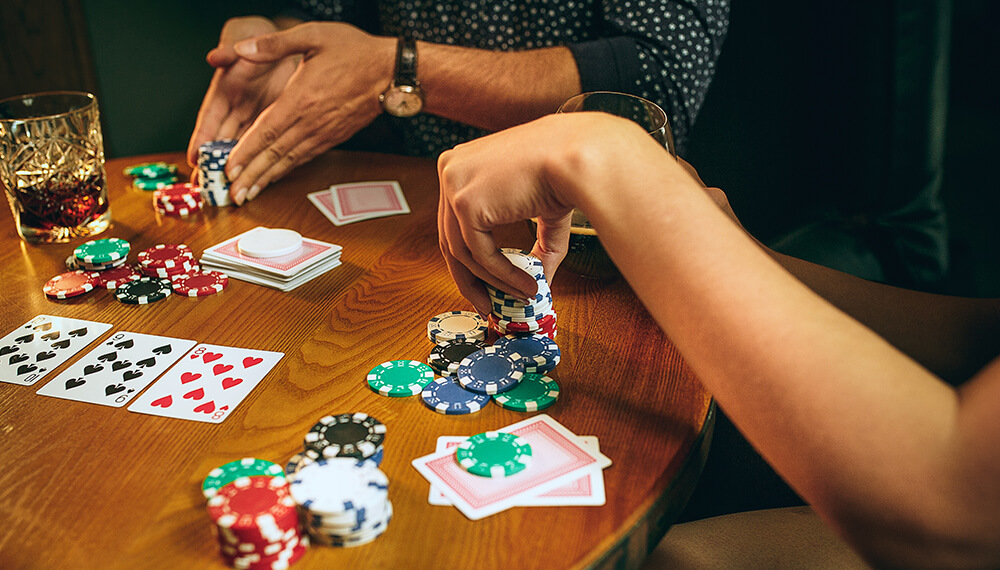 Three cards Poker is a very famous variation of poker, and one that players frequenting casinos are incredibly familiar with. Many places also more popularly offer this version as there are lesser rules to learn and the house edge is fairly low too if played well.

First off, this game of poker is played against the house or the dealer instead of other players at the table. The deck of cards used is the usual standard 52 card deck. The goal of the game is to have the best hand with only 3 cards dealt.

The game has 3 main bets. The First is the Ante bet which is the main bet of the game. Then is the pair play bet which is basically a side bet on the possibility that the first three cards you are dealt will include a pair. After the first round of cards is handed, if you would wish to continue playing, you can place a bet on top of the cards. Otherwise, a player’s options are to call or fold. 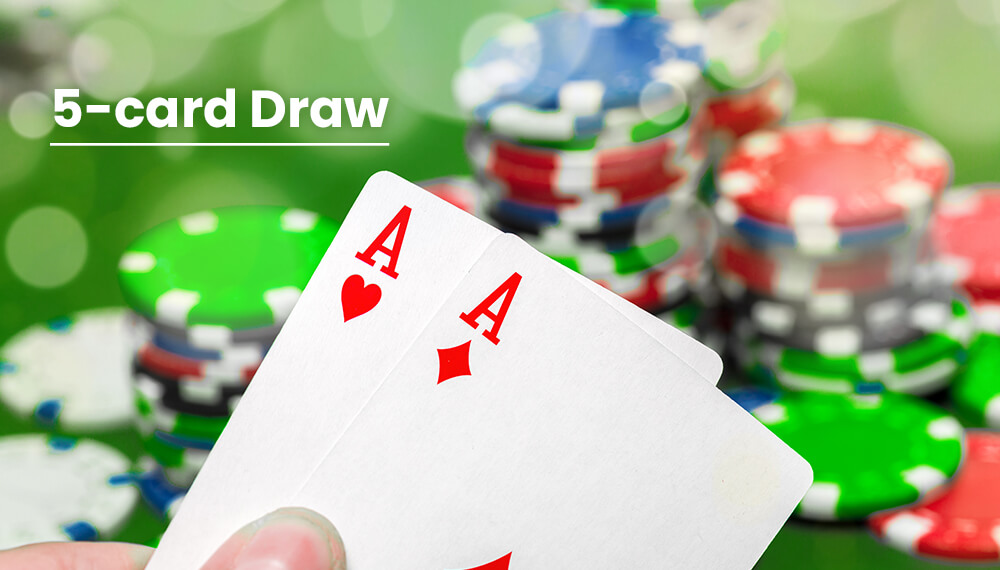 This version of Poker is considered to be the simplest. This is also the poker that is most frequently played at homes and get-togethers rather than at Poker tournaments or high-end casinos. If you are new to poker and card games in general, learning the 5-card draw might be better than going into more convoluted versions.

The game is started with a round of bets. After the bets are placed, the dealer hands out each player 5 cards. Players can then look at their cards and choose to stay in the game or fold. Those who remain can choose to discard as many cards as they want and ask for new cards. This essentially creates a new hand, and then the rounds keep going on till everyone folds or a showdown happens between two players. The person with the best hand of course wins.

This game is easy because it allows you to make your own hand, even though you have to bet for each round. So even if you start with a bad hand, you could eventually end up with a good sequence of cards.

The Seven Card draw variation was the most popular poker game to play before other variations like the Texas one became popular enough to be played at tournaments. The game is a simple one to understand, which is why many still like to play this version.

At the beginning of the game, two cards whose faces cant be seen are handed out to the players. The next card is a card dealt face-up, meaning everyone can see it. Over the course of the game, each player who remains will have a total of 3 face-down cards and 4 face-up cards. You have to choose the best 5 cards in your hand and then choose to stay or fold.

The trick in the Seven-Card draw is to be attentive to the face-up cards everyone else is getting. It is easy enough to gain an understanding of how strong your hand is. Unlike Texas Hold’em, you aren’t only guessing based on body language and community cards, you can actually partially see their hand. Therefore, this is a great game to start playing more complicated versions of poker and to learn how to card count.

Poker is a massively popular game with many variations. The best games depend on why you are playing. Certain games are tailor-made for tournaments while others are better for absolute beginners.

No comments to show.